Skip to main content
Labels
June 29, 2008
Last night Jeff and I went to the Tigers game to celebrate his birthday a day early!!! Yea!!

Jeff's parking garage for work is in Greektown, which is so perfect.

We walked over to this little sports pub called Pappys'. It is a little sports pub with about 6 or 7 flat screen TV's that were playing a bunch of different baseball games. They actually have a "real" food menu, which is more than just your greasy bar food. I had the chicken kabob, and it was really good. They had some good microbrews on draft. Oh, also, they have a great happy hour from 2-7pm!

We drank a bit there, ate our dinner, then started walking over to the stadium. At the light at Gratiot, we run into this guy, who was trying to sell us CD's. He started talking to us and he was freestyling so I asked if I could take a video of him... He, of course, said yes...

We listened to his cd on the way home, and um, it was not so good.

After that we made our way to Comerica Park, and actually our tickets were not that bad. I had bought them off some Craigslist guy that day. We drank beers, watched the game for awhile... The Tigers were up by a lot, then the Rockies scored... And the Tigers rallied in the bottom of the 9th!

There was a quick rain delay. Jeff and I used it to dance in the rain, and move to really close box seats.

Here are some pics (I love how many fans show up at CoPa!): 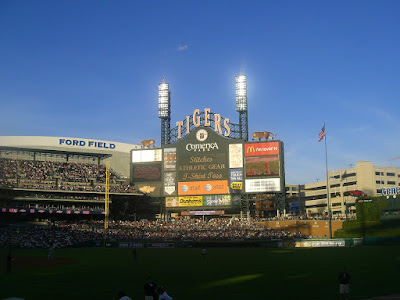 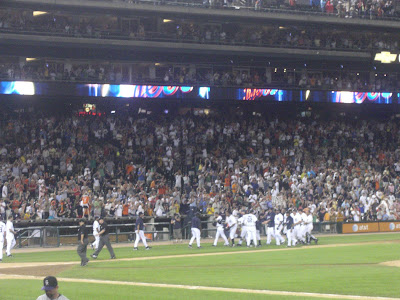 Jeff and I also hit the batting cages.


Finally we went back to the Hills and partied at my neighbors house, where they had a liquor luge. We drank a bit, then decided to go swimming in my pool. The temp in the pool was 86, but I was freezing! We had the patio heater on, but I still couldn't deal with it.

Jeff crashed over and then we just got back from meeting my dad at Moe's on 10, in Novi, for brunch. The brunch is made to order omelettes, some regular staples like eggs, meats, pancakes, fruit, potatoes and then random things like... quesadillas and asian veggies, which were very good. Actually, for a brunch it was very good, and very affordable. Moe's is kind of an "older" person place (I keep forgetting my dad is in his 60's, I never think of him as old??), but the food was good, the service was good and I would definitely go back for brunch.