Update:
Turns out, they got the wrong guy. Horrible. 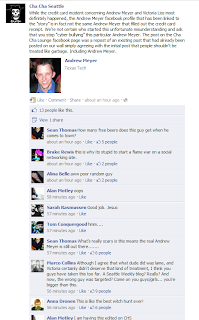 This weekend a man, named Andrew, stiffed a bartender on the Hill and wrote a very mean note on her receipt. In response, the neighborhood has come together to publicly shame him and some bars are even threatening to 86 him from the Hill permanently. Some quick Google searching, or your Cap Hill friends FB page, will give you his full name, pic, link, etc.

I am not quite sure how I feel about this - and some of the comments, hate speech, etc. are totally out of line. Does a person really deserve to be publicly lynched by an angry cyber bully flash mob?

But the fact remains, in this day and age a quick Google search will bring up pictures, work experience, even your first grade teacher's name. It's never a good idea to act like this (and it's just plain rude!) but it's definitely not a good idea when you use a credit card - with your real name.

But, being from Belltown (this happened on the Hill though) we tend to loathe the bridge/ferry/freeway kids (this kid was apparently from Kent) because many - not all, of course - act this way.

One of my clients had a similar incident with one of their own vendors! They posted about it, too, for all of the world to see (sans photo, however.)

This is more and more becoming the norm, so I guess the moral is something you probably started learning as a young child... Treat others the way you would like to be treated. If you don't, you could be the next one to be publicly shamed via social media networks (which oddly enough, goes against the treat others rule...)
Email Post
Labels: capitol hill facebook seattle social media twitter wrong