Last night, the new Westlake location for Seattle's Nordstrom Rack had a preview party to introduce local bloggers, fashionistas, etc. to the new location before it officially opens to the public on March 15.

April, Marissa and I hopped in a cab (hey - it was raining!) and met up with our friend Aubrey (see her post here) to check out the new store and do some shopping.

We arrived and entered through the door located on Pine (but they do have a door that enters through Westlake Mall, too). We were warmly greeted by the store manager, Peter (he's @seattle_rack on Twitter), and other employees and given a tote bag with goodies inside (including a $50 gift card!!!).

The first thing we noticed was the modern entrance, equipped with monitors showing the latest looks and fashion. 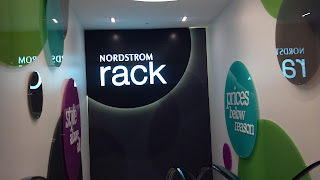 We rode the elevator, went downstairs and wow - this space is HUGE. 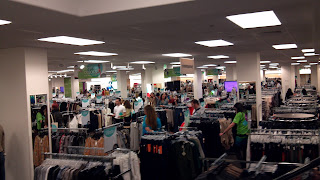 Because we were with April, aka ShoeLusting, our first stop was the designer shoe section (see her post on the night, here). Like the store, it was huge. There were so many options and so neatly organized. One other thing I noticed, both shoes were in the box. Most of the Racks I have shopped only display one shoe and you need to go to the shoe window to get the counterpart. This is a major bonus, because you need to wear both shoes and walk for a minute or two to really get a good feel for the fit. 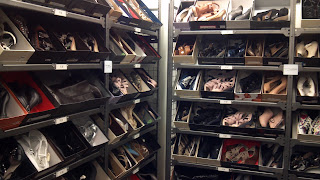 Nordstrom Rack was encouraging Tweets with the hashtag #RackOpening. In usual Elise fashion, I found the most ridiculous items and Tweeted them with the hashtag. Well, it turns out that Rack was giving away door prizes - and the prize was you win what you Tweet. There was one moment of horror when they announced the winner of a Betsey Johnson item but luckily it was not the black spiky heels below.
While I did amuse myself by taking pics of the most ridiculous finds and Tweeting them, I have some serious finds, too.
While we didn't purchase any goodies today (I can't shop on demand like that) I did notice that checking out was seamless. Not only are there a ton of terminals for cashiers, but Nordstrom Rack has a new feature where you can check out with employees on the floor, through handheld devices and have the receipt emailed to you. Genius. Can't wait to use that feature.

Upon leaving, we were all given a bouquet of tulips (Red for Aubrey, April and me; Marissa scored a yellow bunch). Nordstrom Rack is going to have a flower shop open everyday with discounted flowers from local vendors.

Thanks, Nordstrom Rack for the invite - we had a great time!

And I thought I'd save the weirdest find for last... 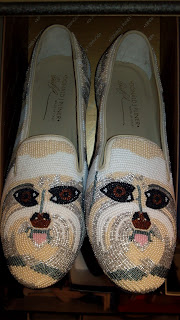 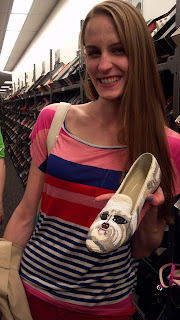 Anonymous said…
Bet365 Review (2021) - R&I's The World's Biggest and
Bet365 is an online casino and gaming company that is a 온카지노 pioneer 바카라 사이트 in the online sports betting 샌즈카지노 industry, operating in regulated countries,
January 31, 2022 at 2:03:00 PM PST